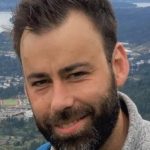 HIV incidence remains high among men who have sex with men (MSM) in Perú. Despite the broad scale-up of antiretroviral treatment (ART) access, new infections have not significantly decreased over the last decade. Low knowledge of HIV status and low rates of linkage to care among MSM living with HIV infection are two key factors contributing to persistently high rates of HIV transmission in this community. New strategies are needed to address these gaps in the HIV care continuum. Venue-based HIV testing has been demonstrated as an effective way to reach MSM in Lima who are at high HIV risk and may not otherwise access traditional clinic-based testing. Given that testing is the key entry point for both HIV treatment and prevention, venue-based testing should be coupled with a robust mechanism to link individuals with appropriate services and support continued engagement in the HIV prevention and care continua. WelTel is an established mobile health (mHealth) platform that may be well-suited for this task; it has previously been validated in multiple settings in North America and Sub-Saharan Africa as an effective tool to support adherence to ART and pre-exposure prophylaxis (PrEP). In this project, we will initiate key formative research to guide the adaptation of WelTel’s two-way text messaging platform for use in future venue-based HIV testing interventions designed to reach MSM in Perú. Based on the findings of key stakeholder interviews and focus group discussions with the target population (MSM in Lima), we will develop a beta version of a locally-tailored two-way messaging intervention adapted from WelTel. To evaluate usability and guide further optimization of the application, we will conduct field testing with target users in Lima.

Novel interventions to support HIV testing and linkage to services could have a significant impact on reducing HIV transmission among vulnerable populations in Perú by improving access to HIV testing, treatment, and prevention. This project will inform the development of a locally-tailored two-way messaging application by leveraging the strengths and technical infrastructure of an existing mHealth platform (WelTel). Ultimately, the application we develop will constitute a core component of future combination interventions designed to support venue-based HIV testing and linkage to services in Perú.