Including Men in Women’s Health

Fan Lee is currently in her 3rd year of medical school and has a background in cancer research and bioengineering. Her Fogarty project will be exploring the knowledge and attitudes of Kenyan men towards cervical cancer and their potential impact on cervical cancer screening at the University of Nairobi, Kenya.

Persistent bleeding after intercourse. That is what drove Mama Ruth to the hospital three years ago. She felt strong at 42 and there was no sickness – no fever, no pain, no fatigue, so she let it go unnoticed for months. She had heard rumors of a cancer that affects a woman’s parts, but thought the bleeding was AIDS. She has lived with HIV for over 13 years now, visiting the HIV clinic every first Tuesday of the month for her antiretrovirals. When the bleeding would not stop, she was sent on a three hour motorbike trip to town. “They said they could operate if I can pay. But they gave me nothing,” she said, “and no hope. They told me I had another disease of which there was no cure. Why would I let them cut me?”
Cervical cancer is a death sentence for too many women in low-resource countries. Since her diagnosis, Mama Ruth took on the role as a community health worker and single handedly brought cervical cancer screening to her district. Armed with a teaching flipchart she received at a visual inspection with acetic acid (VIA) training course, she and I spoke to women. For the handful recruited for screening, Mama Ruth would conduct VIA in spare rooms of the hospital, and then send women to the national hospital in town for removal of detected lesions.

Through this experience after my first year of medical school, I caught a glimpse of the day-to-day struggles women face and how these struggles impact women’s access to care. I heard about poverty and lack of transportation, poor facilities and limited trained personnel. But there was another discussion that emerged over and over again, one of stigma, society norms and gender disparities that affect the healthcare seeking behavior of women. Though it is important to be aware of resource limitations for successfully implementing women’s health services, we must also take into consideration the complex social dynamics that play a large role in a woman’s ability to make health decisions for herself. That is what I hope to explore in Kenya through a qualitative research study; to investigate the attitudes of male partners and their role in successful cervical cancer screening and treatment. I am fascinated by the nature of cervical cancer as a disease, and my experience working with women of East Africa has impassioned me to improve the health of women worldwide.

Gender power relations play a crucial role in sexual and reproductive health around the world. In patriarchal societies like Kenya, where male partners hold significant power over the health seeking behavior of family members, involvement of men is critical for the success of cervical cancer prevention programs. Our novel effort to engage and explore male partners’ awareness and attitudes towards cervical cancer screening will provide a critical perspective that will inform the development of interventions to engage partners not only in the screening process, but all aspects of female reproductive care. Potential interventions could be to incorporate partner counseling during screening, educational programs for men who accompany their female partners to follow-ups, peer education programs among men, or large-scale media campaigns to encourage male partner support. We believe that the more men are able to understand the implications of reproductive health and preventative care for their female partners, the more they will be able to provide encouragement and support. This study hopes to explore perspectives of not only women, but men, on the barriers to partner support as well as the actual and potential role as supportive partners in cervical cancer screening. This information will be helpful in developing strategies to implement sustainable interventions to include male partners in the cervical cancer screening process.

As a medical student, I cannot imagine a more exiting career than one that allows me to work closely with women at an individual and community level. It is a privilege for me to be a part of important intimate conversations with women and advocate for women’s health worldwide. I plan on pursuing an OBGYN residency after returning from this Fogarty year in Kenya and envision working with local health professionals to improve women’s access to health, develop effective treatment strategies and work with policy makers to implement culturally sensitive prevention and disease control programs. Ultimately, I hope to have the ability to think critically about the biomedical, behavioral and community aspects of healthcare and disease so that I can better serve my patients at home and abroad.

This article was originally published in the NPGH Fogarty September Newsletter 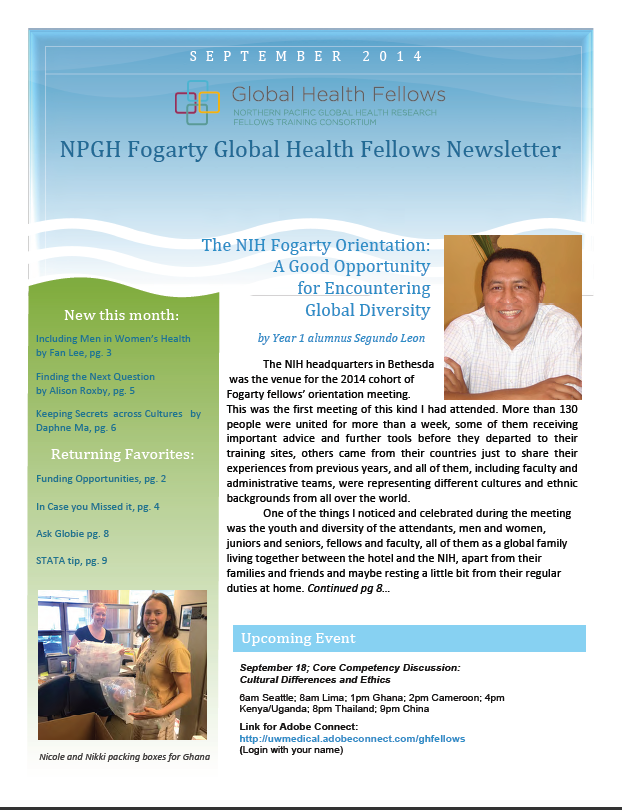